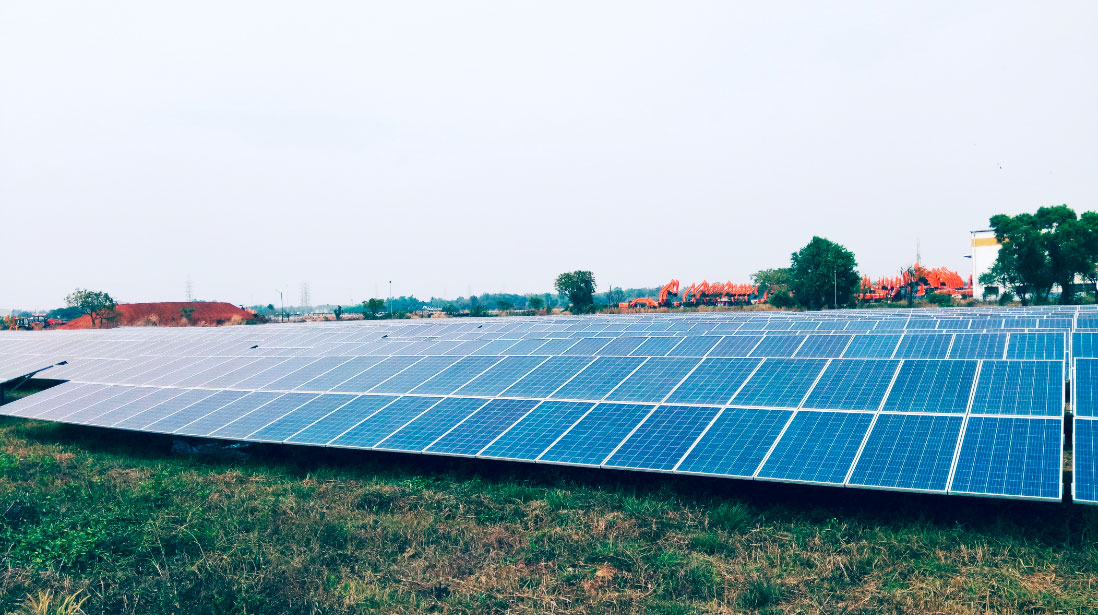 Through this initiative, from 2019 approximately 7,000 MWh per year, equivalent to about 30% of the power consumption of Kharagpur Works, will be provided by environment-friendly renewable energy. This is expected to bring a CO2 reduction of 3,500 tons per year, with annual power costs falling by 14.7 million Indian rupees (approximately 23 million yen).

In addition, LED lighting has already been installed in the Kharagpur Works administration building. Compared to conventional fluorescent lighting, power consumption can be reduced by approximately 76 MWh per year, resulting in an annual power cost reduction of about 680,000 Indian rupees (approximately 1 million yen).

Since March 2018, Tata Hitachi has been using electric power generated by solar panels installed outside the site of its Dharwad Works through a power purchase agreement supported by Karnataka State’s open access system*. 7,500 MWh per year, equivalent to approximately 75% of the power consumption of Dharwad Works, is now provided by environment-friendly renewable energy.

India’s economic development has been accompanied by a demand for power that is growing at an average rate of 4.9% per year. India is expected to overtake the EU by 2025 to become the third largest power consuming nation after China and the U.S., but as matters stand now, the power supply is unstable due to the chronic lack of supply capability. In this context, the Indian government has set a target of 175 GW (100 GW from photovoltaics and solar power, 60 GW from wind power, 10 GW from biomass and 5 GW from small hydro power) by 2022 as a plan for promoting introduction of renewable energy. Through this initiative and in support of the government’s plan, Tata Hitachi will work towards stabilization of the power supply, reduction of power costs and reduction of CO2 emissions.

Together with Hitachi Ltd., the Hitachi Construction Machinery Group is engaged in energy-saving activities at five of its plants in Ibaraki Prefecture, Japan. On January 30, the group received the Chairman’s Prize, the Energy Conservation Center, Japan in the Successful Case of Energy Conservation Category of the FY2018 Grand Prize for Excellence in Energy Efficiency and Conservation.

In addition, the entire group is working towards energy conservation in various manufacturing processes. The current initiative is part of this effort.

* Third parties such as power generators by natural energy and power suppliers have priority to use or have access to the transmission and distribution systems in certain areas.

Information contained in this news release is current as of the date of the press announcement, but may be subject to change without prior notice.
Privacy Policy | Disclaimer
© 2018 Tata Hitachi Construction Machinery | All rights reserved.
WordPress Lightbox Plugin